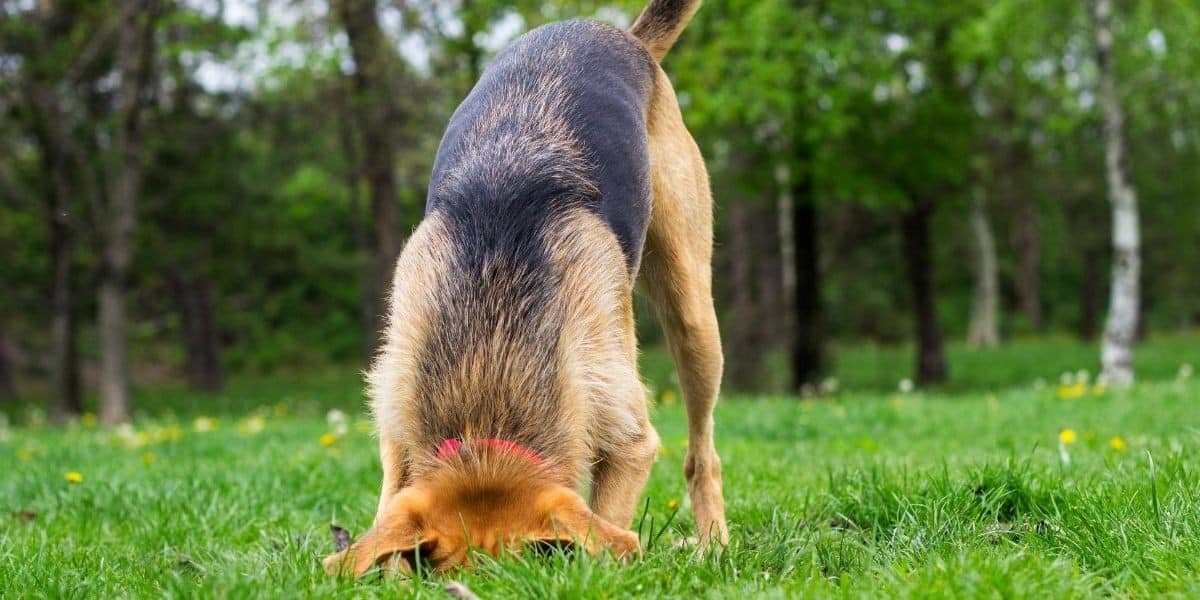 Have you ever observed your dog finish pooping and then immediately kick their legs at the ground around it in what looks like an effort to bury their poop?

We know this common act might seem very confusing at first, or you might assume that they are covering it up (often quite poorly) like some other domesticated animals do, namely cats. The truth is that dogs are not actually trying to cover up or bury their poop.

Dogs do not bury their poop but rather kick up the ground around it in an effort to mark their territory. This is done by releasing a scent from their paws glands and the act of kicking up the ground after finishing pooping or urinating is a territorial message to other species and not an act to cover it up.

Why Do Some Dogs Bury Their Poop?

If your dog goes to the toilet in public then it’s very easy to make the assumption that your dog is burying their poop or urine once they have finished and start kicking up the ground around it. You might also own a cat and notice similar behaviour whereby they will cover up litter in an effort to display alpha tendencies or to cover up and hide their presence (usually from predators).

When a dog covers, or more commonly, kicks the ground around their poop (which is where the ‘burying’ assumption can often be confused) they are not trying to hide their presence from predators but rather display it as a territorial message to others.

Urine and faeces in the wild act as a territorial mark in their own right and when a dog kicks their hind legs back after going to the toilet it is usually to further add to this initial mark.

This is because dogs have scent glands in their paws and release pheromones that cover the area around the urine/poop and act as an indicator to other dogs that the territory is marked. This signal will typically last longer than the urine or faeces alone and is therefore a primary source of territory marking and communication for your dog.

The Exception (When Some Dogs Might Be Covering Their Poop)

The main reason why dogs kick the ground and cover their poop is territorial and an effort to leave their scent however there is actually a theory that says some dogs might actually be covering up and burying their poop.

This will be in rare instances whereby a vulnerable dog would look to cover up the scent of their poop in order to hide, or at least not be detected, by predators.

As mentioned earlier, the scent of urine, faeces and pheromones is used as a communication channel by dogs for a number of reasons (a claim to the territory, sexual availability or a warning) and therefore vulnerable, scared or cautious dogs will not want to leave a scent for fear of attracting predators to the area.

Can You Train a Dog to Stop Covering Their Poop?

So, we know that dogs will attempt to cover their poop for a number of reasons but if you have a domesticated dog, this could end up causing significant damage to your own or a neighbour’s garden.

Therefore, despite this being an innate and instinctive act, you might be wondering whether or not you can actually prevent your dog from doing this through training?

Kicking at the ground around poop is certainly a behaviour that can be trained out of dogs however we’d typically urge against this course in most instances. It’s a natural and healthy reaction for your dog which should come above the needs of ‘minor inconvenience’ for the owner.

How to Train a Dog to Stop Covering Their Poop

If you would still like to discourage this type of behaviour in your dog as a result of them causing significant damage to your own or a neighbour’s property then there are steps you can take to train and reduce this behaviour.

Secondly, you could encourage the behaviour on a separate or particular spot that you don’t mind being kicked up. This could be one specific patch of grass or a separate piece of concrete to kick up on after going to the toilet.

Rounding up – Why do Some Dogs Bury Their Poop?

When your dog kicks their hind legs back after pooping you can now be safe in the knowledge that they are not attempting to cover or bury the poop. Dogs do this purely to mark their territory and it’s an instinctive and natural reaction.

It’s a harmless reaction and if it causes you as an owner any issue (such as destroying your garden with holes) then it is a behavior that can be trained out of the dog. For the most part, however, it’s typically an innocent act with no deeper meaning than simply the marking of territory.