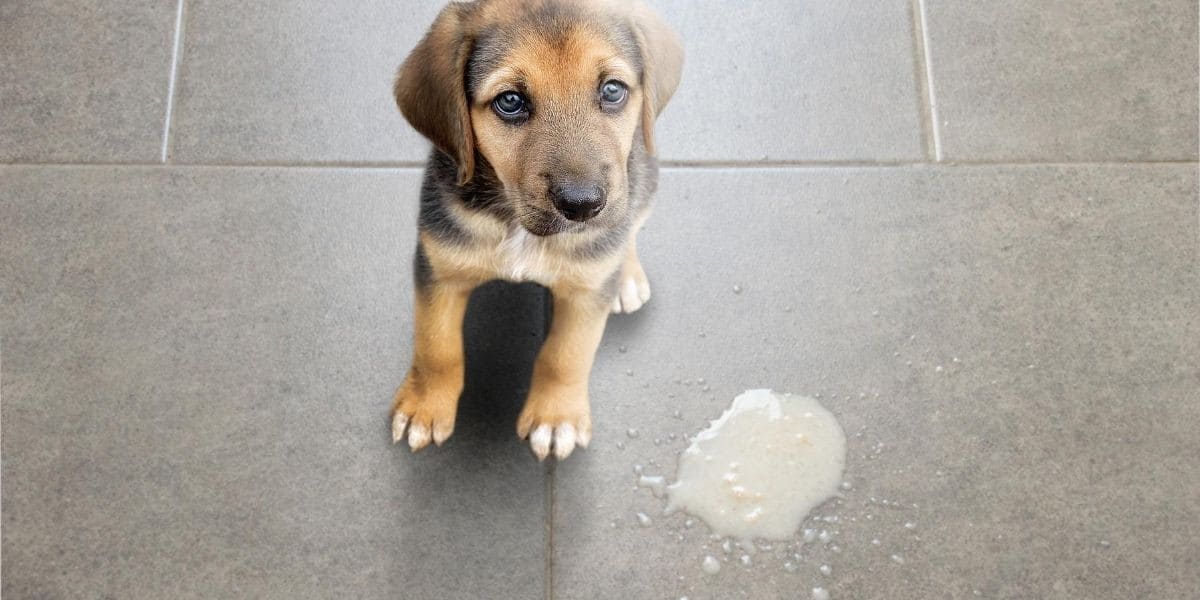 A sight that no pet owner wants to see is their dog (or any pet for that matter) vomiting, firstly, it’s a bit gross to see but it will also instantly strike most owners with panic as the natural assumption is that their dog is sick.

How many of you have experienced this moment whereby you think your dog needs urgent medical attention, only to then see your dog start to eat the vomit as though they’ve received a tasty treat? We know this is incredibly strange behaviour at first and you’ll soon start to question why your dog is eating their own vomit.

Dogs eat their own vomit (or more commonly regurgitation) because they have a heightened sense of smell and can smell what they consider a source of ‘food’ amongst the vomit. They also learned that it was fine to do this as a puppy when they would eat their mother’s regurgitated food as a bridge between liquid and solid foods.

In this article, we will cover not only why dogs eat their own vomit but also whether or not it’s safe, what to look out for and when it might be an indication to seek medical help.

Why Do Dogs Eat Their Own Vomit?

It’s certainly true that dogs have some rather unappealing habits, particularly from the perspective of humans and eating their own vomit is close to the top of the list!

Eating vomit, however, is often confused to be a disgusting act with no real purpose and we can confirm the opposite is actually true. From birth, a puppy will survive on its mother’s milk initially, as it doesn’t have the ability (both from a dental perspective and in terms of digestive development) to consume solid foods.

As the puppy grows it will move on to regurgitated food sources courtesy of the mother, alongside the ‘mushed’ food sources that humans provide them during this stage if domesticated.

The Difference Between Vomit and Regurgitation

Vomiting is an active process whereby dogs will throw up the contents of their stomach, usually as a result of eating something that they shouldn’t have and could potentially cause them illness. It’s therefore a safety mechanism that dogs innately have for survival because they can (and often do) eat almost anything they find that resembles food, which of course can cause issues!

Regurgitation on the other hand is food that is thrown up before it reaches the stomach and is a passive act that can occur too quickly to even notice. Regurgitation is typically undigested and partly unchewed food that will be covered in saliva and mucus and often occurs immediately after eating.

This distinction is crucial to understand why dogs eat ‘vomit’ as there is usually a reason for a dog throwing up after eating.

Surprisingly, dogs actually like to eat vomit because they can smell the edible food that can be found inside. A human doesn’t have a sense of smell powerful enough to pick this up but a dog’s enhanced sense of smell typically indicates that they have a tasty source of food available.

They will not hesitate to eat it so in a way, dogs do like to eat vomit because to them, it’s still just another source of food and the action comes naturally to them.

Why Do Dogs Throw up After Eating?

Dogs might like the smell of the food that’s concealed by vomit however they will not intentionally vomit just for the sake of eating a second meal! Dogs throw up after eating for a few key reasons:

They Have Eaten Too Quickly – Dogs that have eaten food too quickly with minimal chewing as a result of enjoying the food, eating out of anxiety or inhaled a lot of air during eating will result in the food getting stuck in their esophagus and then regurgitated back up.

To prevent this, slow down their eating by feeding them in smaller portions, spreading the food out on the plate or even using a feeding puzzle or slow feeder bowl; all to ensure they eat at a much slower pace.

Gastrointestinal Issue – A change in diet can cause an upset stomach if brought on too quickly. The dog could have allergies, food intolerances or the new type of food could also result in an upset stomach and resultantly throwing the food back up.

The best thing to do in this instance is to introduce new foods or diet changes slowly and if the issues persist, take them to get inspected by a vet.

To Feed Someone – In the wild or in a domestic household, dogs will regurgitate food to share it with puppies, the pack in general or a loved one in the form of a trusted owner. They will then eat shortly after to ensure it doesn’t go to waste.

Different Types of Dog Vomit and What to Look Out For

You should also know that there are three common types of vomit in dogs and knowing the difference between them could help you identify an innocent act of eating food that they can smell in the vomit or a serious illness. These different types are:

In all situations above, you should still monitor your dog to ensure they are not showing any signs of illness or dehydration and if you are in doubt, seek immediate medical attention.

Final Thoughts – Why Do Dogs Eat Their Own Vomit?

Dogs eating their own (or other animals) vomit is nothing to worry about in infrequent instances. Dogs can typically smell when something is suitable to eat and therefore what we see as a gross act is just the dog simply getting some food.

If you notice frequent vomiting or regurgitation (a few times a day or in multiple periods over the course of a week) however, it could be a sign that your dog is either unwell or is experiencing digestive issues and we’d recommend taking them to a vet to get checked out.

All products in this article can be found on amazon, any links which are clicked and subsequently purchased may provide us (bowwowtech.co.uk) with a small commission. Any commissions earned are reinvested to enable us to produce more articles and provide educational material to visitors to our site.